The Anurag Sagar by Kabir

– The English text is a loose poetic translation in co-operation with an initiate of Kirpal Singh. 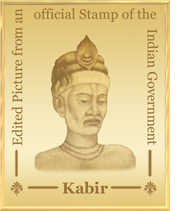 Kabir Sahib was born in 1398 A.D. at Lahr Talao near Benares and left His body in 1518. A weaver by profession, He resided and worked in Kashi. All over the world, He is known this very day as one of the greatest mystic poets of India; but in fact, He was much more. Namely, it was Kabir, Who conditioned the teachings of Para Vidya, which were existing since time immemorial, for our today’s world. Therefore He is – together with Guru Nanak – the founder of the Sant Mat in it’s today’s form.

This Anurag Sagar by Kabir with explicit footnotes is a speciality; in no other scripture the history of the creation, as it really happened, is told in such detail. Kabir also describes how He, Gyan – by order and as an embodiment of Sat Purush – came to earth in all four ages under different names1 to proclaim the Truth, to connect the Souls with Naam and to constitute the lines of the Gurumukh Gurus, by Which the permanent presence of the Truth on earth was warranted.

In Sat Yuga – the Golden Age – Sat or Truth reigned supreme; in Treta – the Silver Age – sacrificial oblations had their day; in Dwapar – the Copper Age – idol worship was the law of the land; but in Kali Yuga – the Iron Age –, Naam is the most potent and sovereign remedy.